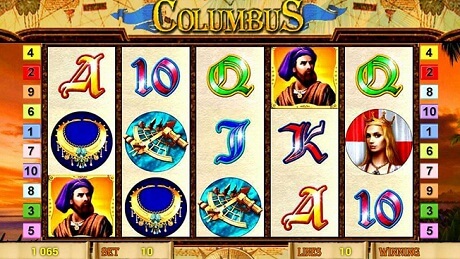 Columbus is a very basic online slot from Novomatic. The game runs over the standard five reels, but only has nine optional paylines. Wagering amounts run from 1 all the way up to 900 coins per line, meaning that this slot will definitely appeal to those of all budgets. This being said, players with a larger bank roll may not find this slot attractive at all due to its serious lack of special features and not many other attractive traits. Columbus the slot began life as a brick and mortar slot that was found all over the world. Novomatic then transformed it into an online slot, but did not change a whole lot. This will appeal to the players that enjoyed the slot in its brick and mortar form, but probably won’t appeal to those who know how much more there is available out there.

The theme behind Columbus is pretty self explanatory unless you know absolutely nothing about history. Columbus was a Spanish explorer who supposedly discovered America. The theme of the slot represents this, with some of the symbols being theme based such as a sextant, a golden necklace and a queen. The base symbols are not theme based and are simply poker card 10 to Ace. These have had nothing done to them other than being in different colours. This means that Columbus has a sum total of a whole twelve different symbols.

Columbus is not an aesthetically appealing slot. Novomatic did very little in the way of graphics when they transformed the slot into its online version. There is no background to the reels, just a non descript brown. The symbols themselves are done in typical slot machine style, which is to say that they are drawn but not cartoony. There really is very little to say about the graphics, other than that they are recognisable as the correct theme. The sound track is also totally generic. You can hear the familiar sound of a brick and mortar slot making its beeps and boops, totally un theme related. This is the generic Novomatic sound track that is found in so many of their slots.

Unlike a lot of available slots at https://pokiesonlinenz.net.nz/casinos, Columbus only has two special features. The first is the games wild symbol. This is rather unsurprisingly represented by Columbus himself. He can replace any other symbol in the game except for the three scatters. The wild has a second function, which is to award the biggest payout in the game which is also the standing jackpot of 20 000 coins.

The game actually has three scatter symbols. These are the three ships that Columbus sailed on when he discovered the Americas. The Nina, Pinta and Santa Maria must appear on reels two, three and four all together to launch the free spins. This does actually happen quite often as Columbus is a low to medium variance slot. This means that the small to medium wins happen at regular intervals at this historical pokies online, but don’t hold your breath for the jackpot, although it is possible. Ten free spins are awarded when you find all three ships, and during this round the ship scatters act as wilds as well. This can be retriggered while the round is going on to land you with many more than the initial ten free spins.