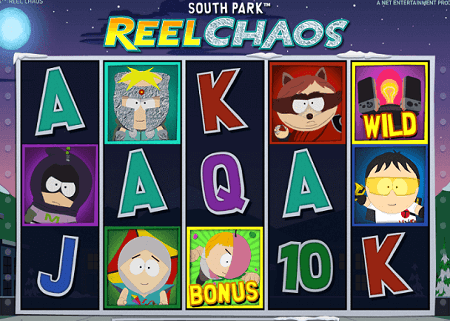 South Park is an adult animated television series by the same name, created by creative masterminds Trey Parker and Matt Stone.  The show revolves around the lives of Eric Cartman, Stan Marsh, Kyle Broflovski and Kenny McCormick, four pre-adolescents living in the imaginary town of South Park.  South Park is generally regarded as slightly controversial, due to the social issues portrayed and the colourful language used.  Despite this, the show has a large following the world over, and has developed into a fully-fledged, highly popular, brand.

Regular fans will be well familiar with the social outcast named Butters, often seen trying to join social circle of Eric, Stan, Kyle and Kenny, but without much success.  Butters is lonely and as a result, creates an alter ego for himself, the hardcore villain (everything Butters is not) Professor Chaos. Professor Chaos later employs a sidekick, Dougie, and bestows on him the title of General Disarray.

South Park: Reel Chaos is based on the antics of Professor Chaos, and the four boys this time pose as superhero’s, on a mission to defeat the evil Professor once and for all.

Symbols include many of the beloved show’s characters, as well as standard playing cards, being the lower paying symbols.

The wild symbol substitutes for all regular reel symbols, with the exception of the scatter symbol.

The scatter symbol is the key to the Mintberry Crunch Epic Bonus Spins Round, and the aim is to land a combination of 3 or more anywhere on reels 1, 3 and 5.

Mini-Features come into play at random intervals and include Cartman’s Stacked Wilds, Stan’s Multiplying Respins, Kenny’s Multiplier and Kyle’s Overlay Wilds.  A vast number of multipliers are applied during the mini-features, and they also include free spins galore.

Like keno explained online here, South Park: Reel Chaos can be played for fun and free or for real money around the globe.

Four sworn enemies must be defeated during the Mintberry Crunch Bonus Spins Round.  The Evil Minions, General Disarray, Professor Chaos and Anime Professor Chaos.  A health meter appears on screen.  Each time a winning combination landed during the bonus spins round, Mintberry (the player) will gain a bar of health on the health meter.  Adversely, each time a non-winning combination is landed, a bar of health is awarded to the villains.  Mintberry will rise on the ladder of success, defeating one enemy after the next, until all 4 are defeated, for as long as he remains in good health on the health meter.  On each level, a random multiplier is awarded, and in the event that Mintberry defeats all 4 enemies, a special Victory Bonus prize is won.