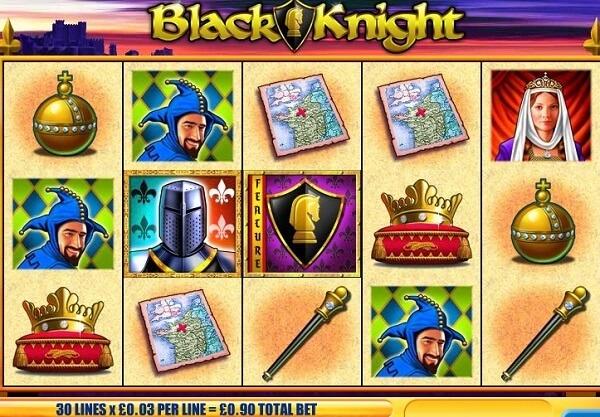 The game finds its setting in the time of King Arthur, a feisty Monarch well known for triumphantly defending Britain against the Saxon forces.  Heroism and great victories were at the order of the day, with the Knights of the Round Table valiantly fighting to defend the honour of their King and Country.  Central to Arthurian texts exists a legendary and enigmatic figure, namely the Black Knight.

In keeping with the essence of Camelot, the game borrows many a theme and character from the source of its inspiration.  On the five reels you will find all the old familiars – the King, the Queen, an image of the royal Crown, a map of France, the Jesters and of course, the Black Knight himself.

In keeping with the classic and enigmatic nature of the Black Knight, the graphics may not be all that modern or spectacular, but it certainly serves its purpose in creating the feel of a truly vintage experience, reminding of a time of battle and valour, the sheer gallantry of brave men in the King’s service seeking the approval of their royal overlords and conquering the hearts of fair maidens.  The graphics and the sound effects certainly succeed at creating a suitable and befitting atmosphere in keeping with the charms of the particular period in history that it is based on.

Black Knight features a number of 30 pay lines. Only active pay lines register as wins.  Wins on multiple pay lines are added together.  Though apparently not very big, wins appear to be quite frequent, mostly making up for the difference.  The total stake is made up of the bet placed per line, multiplied by the number of active pay lines.

The Black Knight, being the star personality in the game, is very much at the centre of attention, appearing on Reels 2 through to 4.  His symbol also acts as the Wild Symbol in the game, popping up at random intervals, and replacing the other symbols, including the game’s Crest scatter symbol.  Scatter payouts are added to the wins on pay lines.

Once the free spins feature is triggered, the Black Knight will on his appearance expand to cover the length of the entire reel on which his symbol appeared, and will stay there for the remainder of the free spins.  The pay line total is only tallied and credited after the Black Knight has expanded, increasing any winnings exponentially.

A refreshing visual feature is the use of an alternate set of reels during free spins.  Free spins are activated by landing 3 or more feature symbols in any position on the reels.  The trick seems to be to get the free spins early on in the game.  Extra free spins cannot be accumulated during a free spin run.

True to the grandiose nature of the legendary Black Knight, hitting the Jackpot rewards the player with a mighty 10 000 coins.